History of the Camino Inglés

What is certain is that pilgrims have been coming from northern Europe to the tomb of the Apostle St. James for more than 800 years. Most of them came from Great Britain and Ireland, but there were also many from what are now the Nordic countries, the Baltic countries, Finland, Iceland, part of Germany and the Netherlands.

Pilgrims from all these territories preferred to risk a sea voyage of at least two to four weeks rather than come overland and spend a year or two. This route went down in history as the Camino Inglés, and its official starting point is Finchale Abbey (County Durham, near Scotland), the meeting point for pilgrims crossing the North Sea, while others preferred to go along the coast.

Among the distinguished personalities who, for one reason or another, passed along the Camino Inglés are the mystic Margery Kempe, the Hungarian (today it would be Slovakian) religious figure Janos Zádori, the Emperor Charles I of Spain and V of Germany, the Duke of Lancaster and Cosimo de Medici.

Pilgrims have been coming from northern Europe to the tomb of the apostle St. James for more than 800 years. 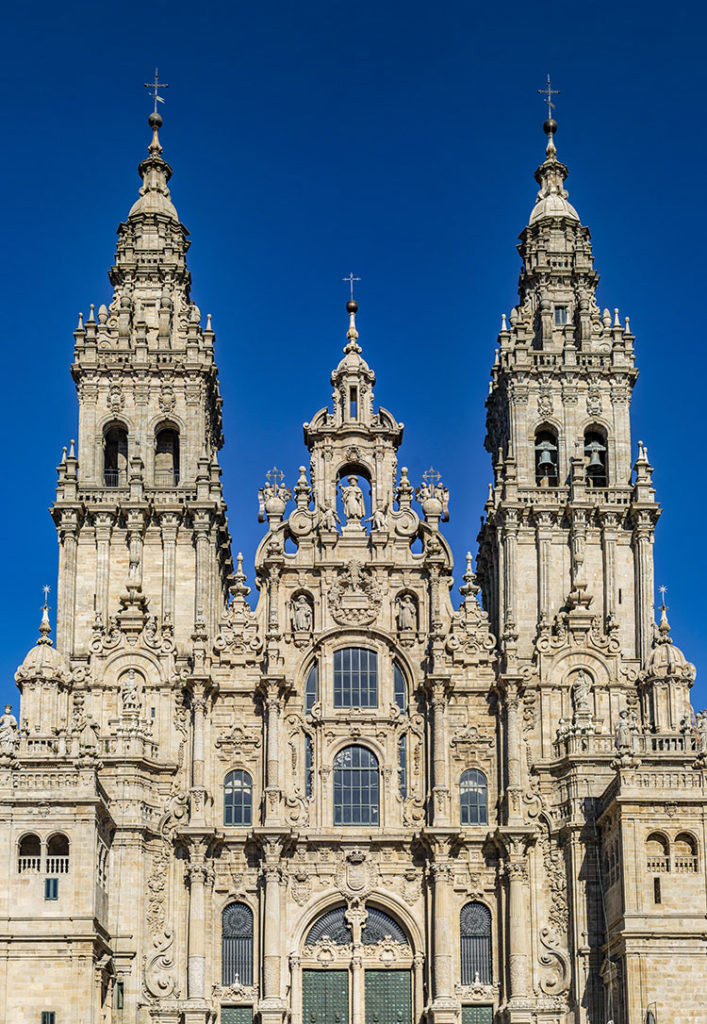 Origin of the Camino

The sources on the port destination of the pilgrimages that chose the sea route of the Camino to reach their goal, the Galician city of Santiago de Compostela, mention A Coruña with few exceptions. The Jacobean pilgrimage — from the Latin ‘Iacobus’— emerged towards the end of the 9th century. Its origin lies in the discovery, in what used to be an abandoned forest and cemetery and is today the Galician city of Santiago de Compostela, a tomb attributed to Saint James the Great.

This apostle, one of Jesus' favourite disciples, preached in Hispania, reaching the western end of Galicia. On returning to the city of Jerusalem and being beheaded to death there around the years 42-44, his body was brought by sea, according to certain traditions, to Galicia, where it was buried. The memory of the burial was lost until its discovery in the second decade of the 9th century.

In a surprising phenomenon, decades after the discovery of the tomb, the first distant pilgrims arrived there. From the 10th and 11th centuries onwards, they came from all over Christendom, that is, from all over Europe. Most of them converged on Santiago by land, crossing the continent from as far away as Poland and Armenia.

Camino Inglés in the Middle Ages

From the 12th century onwards, there is abundant historical documentation of maritime pilgrimages from Scandinavia and the British Isles, who arrived on the Galician coast to continue their journey by land to the tomb of the Apostle St. James.

It was not only English pilgrims who opted to start the routes from the coast of A Coruña to Santiago de Compostela. In fact, in the early and late Middle Ages, the Camino Inglés was not only travelled by English devotees, but also by Scots, Irish, Scandinavians or Flemish; that is, from the north and west of Europe.

The sources on the port destination of the pilgrimages that chose the sea route of the Camino to reach their goal, the Galician city of Santiago de Compostela, almost without exception mention A Coruña. This is confirmed by researchers. The British Robert B. Tate and Thorlac Turville-Petre are among them: 'A Coruña’—they write— 'was the great meeting point for pilgrims from northern Europe who came by sea'. Of course, most pilgrims to Santiago, both past and present, follow land routes, but the sea pilgrimage was very popular, especially in the 13th to 16th centuries.

Visiting the tomb of St. James was and is the main reason for the pilgrimage, which after falling into oblivion in the 18th century revived with great vitality in the 1990s. Those who leave from A Coruña can obtain, under certain conditions, the ‘Compostela’, the certificate granted by the basilica of Santiago de Compostela to those who follow the Camino. Pilgrims departing from Ferrol, after more than 100 km, can obtain it by presenting their pilgrim's credentials, rigorously stamped.

St James and the Sea

The sea is part of the origin of the Jacobean pilgrimage. Tradition has it that the apostle St James the Great arrived by boat on the Iberian Peninsula to preach the word of Jesus Christ. He continued by land to the western coast of Galicia, considered by the Romans to be the ‘finis terrae’, the end of the known world.

A second tradition states that after his death in Jerusalem, his disciples brought him to Galicia in a ship to bury him. They had a reason. Because it was considered to be lands-end the west of Galicia was understood to be the most distant place that Evangelisation could reach. In this sense, the burial of Santiago in such a remote land would be a symbol of the roots and extension of Christianity.

St. James is mentioned in the Codex Calixtinus, a 12th century text that is essential for understanding the medieval culture of pilgrimage, as the protector of pilgrims by sea. He was therefore the patron saint of European ports and many ships were named after him, including several dedicated to the transport of pilgrims. The English port of Dartmouth stood out in the list of ports and ships dedicated to Saint James.

The distinctive emblem of the Jacobean pilgrims is also maritime - the scallop shell, a metaphor, among other virtues, for rebirth and good deeds.

It is estimated that the English ports with most pilgrim traffic to A Coruña were Bristol and Plymouth, in the west and south of the country, respectively. They were followed, among others, by Dartmouth, Fowey and Falmouth, and to a lesser extent Southampton, Poole, London, Winchelsea, etc. According to surviving documentation, ships carrying Jacobean pilgrims departed from at least 30 ports in the south, east and west of the United Kingdom. 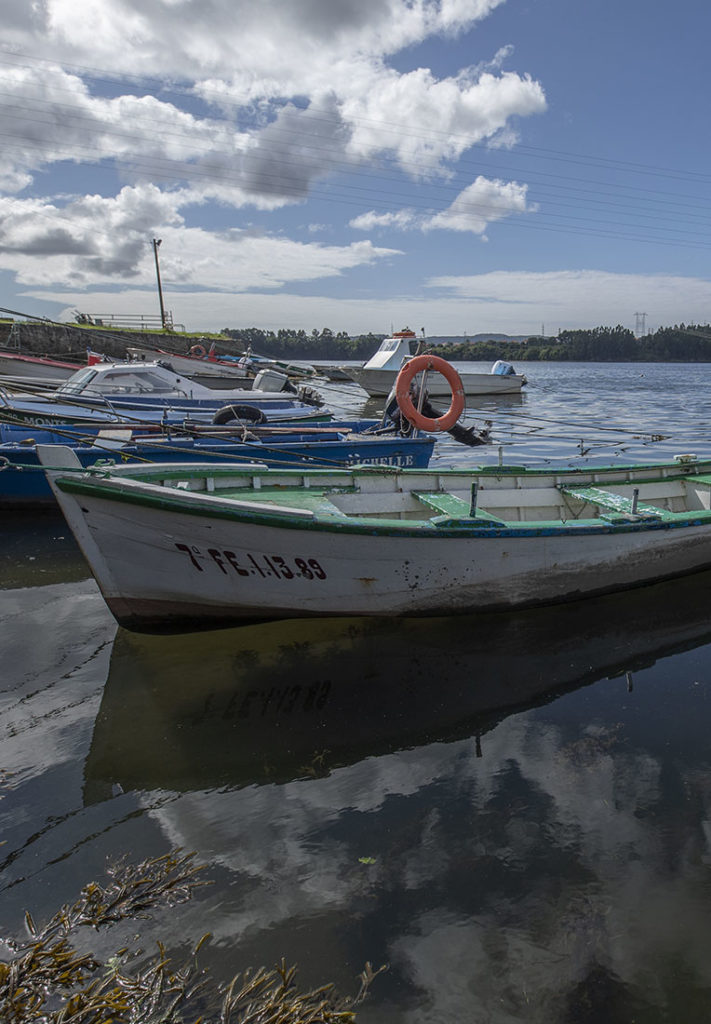 Both the variant from A Coruña, also known as the Camino del Faro, and the one that starts in the port of Ferrol, show the historical importance of this route because the Camino favoured the establishment of monasteries, hospitals and religious orders that were responsible for their care. In short, the defenders of the pilgrim.

Far from the overcrowding of other routes, the Camino Inglés is a route that currently runs through the towns recovered by virtue of documents, deeds and registers that referred to their demarcations or to the passage and stay of travellers. It is also a well-signposted itinerary in the 18 municipalities it crosses. A Jacobean route promoted by different administrations and entities such as the Association of Local Councils of the Camino Inglés, the Diputación de A Coruña and the Xunta de Galicia.

The shortest variant starts in A Coruña, with just over 73 kilometres. Leaving from Ferrol, the distance is 113 kilometres. Divided into several stages — three or four days from A Coruña and six from Ferrol — the routes converge at As Travesas, in Carral, but the pilgrims can choose the Slow Camino Inglés in order to enjoy even more of their path.

Ferrol, Pontedeume, Betanzos, A Coruña... towns with history, some of medieval origin, others of dethroned noble and bourgeois populations, connected by solitary paths and lush forests of which a sample is kept for the pilgrim of today. Paths long which spirituality led religious, knights, soldiers, devotees, penitents and condemned souls to travel.

A journey of cultural exchange, the Camino Inglés, despite its lesser impact, first opened a door nine centuries ago - which was then to be reopened just over two decades ago. It is walked for reasons that go beyond religiosity. Every pilgrim having his own reason… 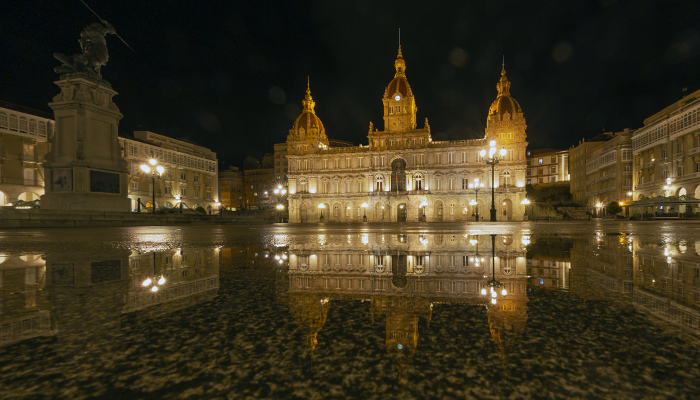 The Compostela from A Coruña

To obtain the Compostela, certificate of completion of the pilgrimage, it is required that at least the last 100 km are completed on foot and 200 km if you go by bicycle or on horseback.

However, given the historical exclusivity of the pilgrimage from the port of A Coruña, in December 2016 the chapter of the basilica of Santiago de Compostela approved its concession from this city as long as certain requirements are met.

The condition established to obtain the historical certification, always departing from A Coruña and arriving at the Cathedral of Santiago, is the previous completion of the Camino in the country or region of origin of the pilgrim. A special mention is made for the inhabitants of A Coruña, who will receive the Compostela by visiting the Jacobean areas of their city and making a pilgrimage on foot to Santiago.