Camino Inglés in the UK and Ireland

The Camino Inglés to Santiago de Compostela is linked to a number of pilgrimage trails enabling modern pilgrims to start the journey before leaving their country.

The Camino Inglés has been the route chosen for many centuries by pilgrims travelling by sea from numerous ports located in the European Atlantic and also from the Baltic. It is well known that countries such as the United Kingdom, Ireland, Denmark and Germany have had a long tradition of pilgrimage to Compostela. 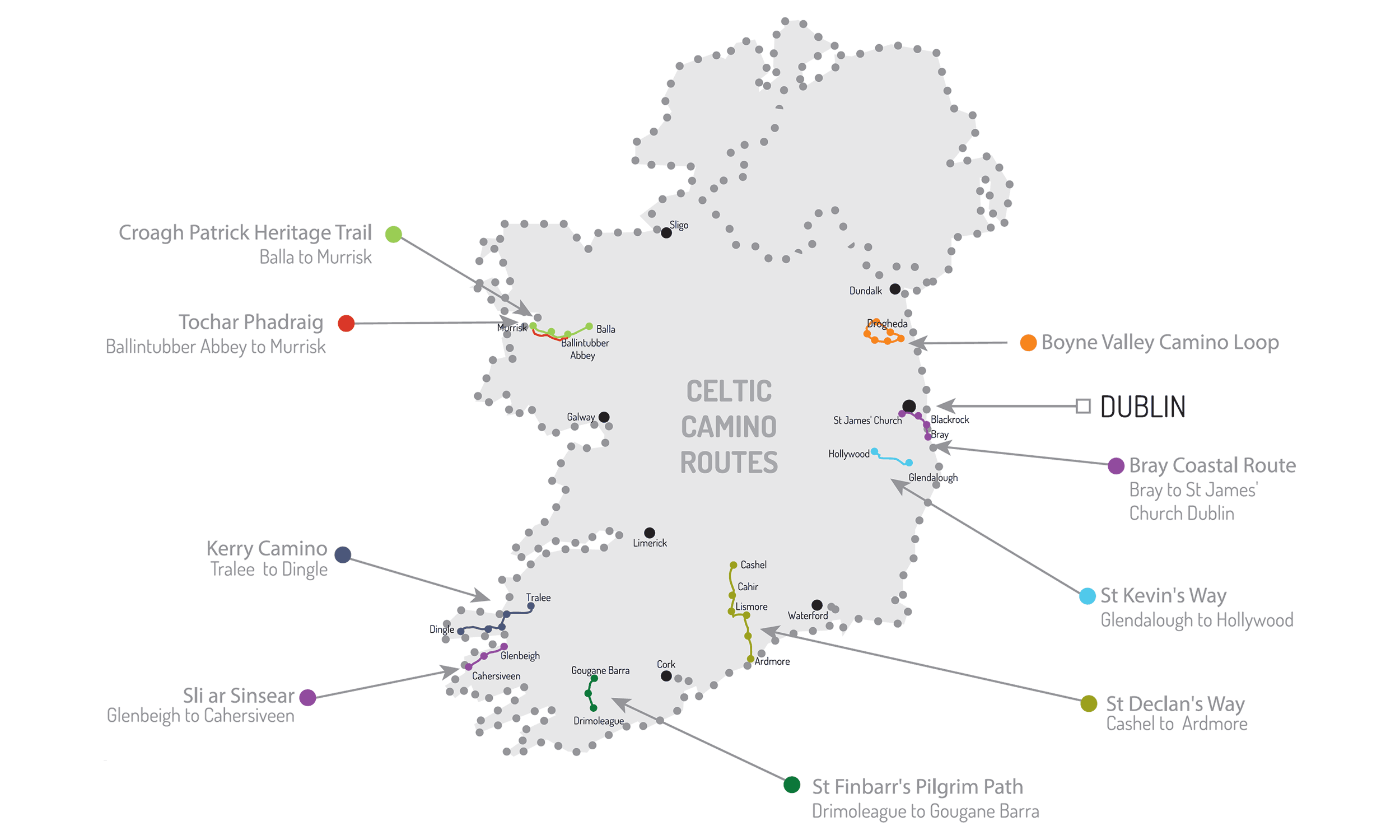 Today, this tradition has regained prominence and many organisations are working to recover the routes followed by medieval pilgrims from their countries of origin to the ports of embarkation on their voyages that took them to Santiago.

The British and Irish were the most numerous pilgrims and so it is not surprising that they are currently making the most commendable efforts to enhance the value of the Camino Inglés and rediscover the routes that the pilgrims followed. 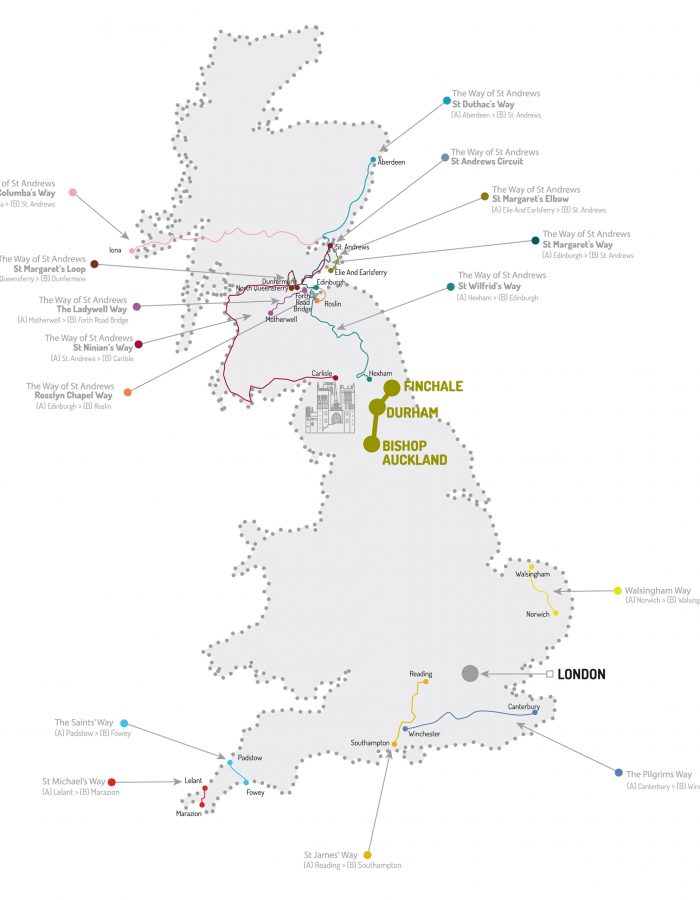 In this process, the work being carried out by the Association of Town Councils of the Camino Inglés and the Provincial Council of A Coruña together with non-profit organisations such as the Confraternity of Saint James, in the United Kingdom or the Camino Society Ireland, is fundamental. In both Associations of Friends of the Camino, as well as in other local groups, many volunteers carry out various activities such as the publication of guides on the Camino Inglés, the recognition (once their historical value has been proven) of pilgrimage routes in these countries, the marking of the routes with their characteristic yellow arrow and the scallop, as well as the dissemination through artistic and educational projects or the organisation of pilgrimages among many other actions.

The kilometres covered on the Camino Inglés routes in the United Kingdom and Ireland (accredited with the corresponding stamps on the credential) count towards obtaining the Compostela, a certificate issued by the Catholic Church that requires a minimum of 100 km on foot, when starting the Camino Inglés in A Coruña.

The Camino Inglés in England

The origin of the Camino Inglés is located in the county of Durham, in the northeast of England, very close to Scotland. A route that for some years now has been recovered and promoted by the association Friends of Finchale Camino (with the support of the Provincial Council of A Coruña and the Association of Town Councils of the Camino Inglés). From the beautiful abbey of Finchale, St Godric in the 12th century began one of the first pilgrimages from England to Santiago of which there is historical evidence. From Finchale the Camino Inglés is signposted with yellow arrows to the church of Escomb, passing through the historic city of Durham and its World Heritage-listed cathedral, where it is possible to stamp the credential, and through places such as Bishop Auckland. It is a magnificent 34km (21 miles) route that extends each year towards the country's southern ports.

The Camino Inglés starts at Finchale Abbey, which is known there as a simple priory. The excellent signposting makes the first stage of the route easy to follow, ending at Durham Cathedral. Finchale was founded by St Godric, who also made pilgrimages to St James, Jerusalem and Rome. Today there are huge and imposing ruins still standing, which can be visited for an entrance fee, as is alCaminos the case at similar sites in England. It requires at least an hour's time, and it has a café on the spot too where you can rest. The hardest part is the first kilometre, when you must climb a hill. You skirt the hill and a farm to enter a lovely wood. The signposting avoids confusion with other paths and we reach the lower part, with Durham Cathedral and Durham Castle in the background. Thus the pilgrim leaves the gardens of Crook Hall to his right after walking half a dozen kilometres and steps into the city centre. All that remains is to cross the river and climb up to the cathedral. 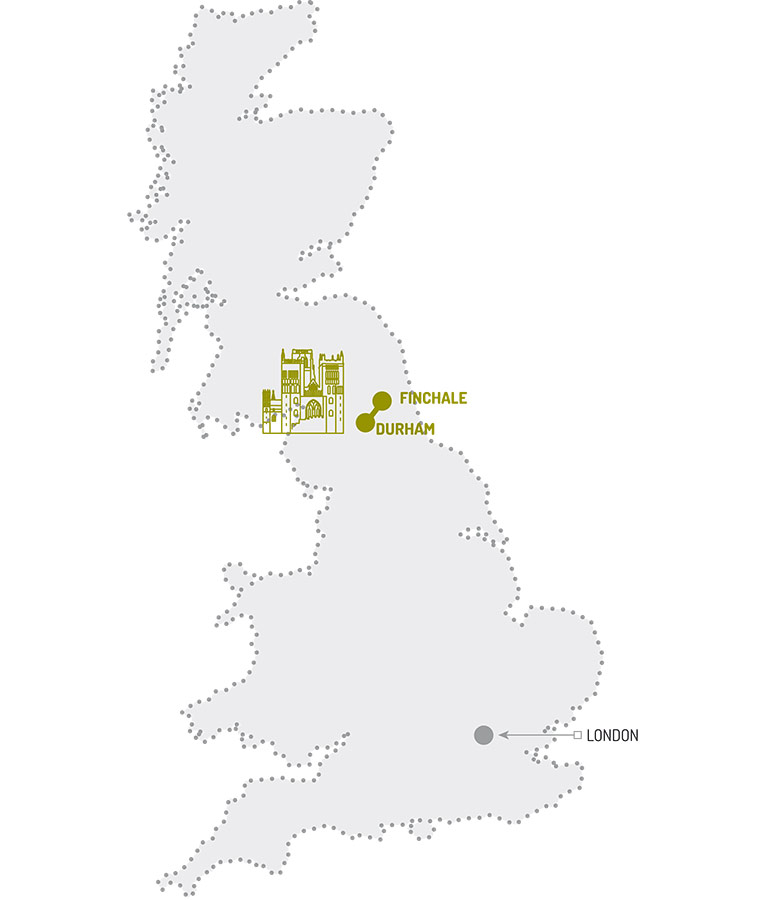 The second stage on English soil goes from Durham Cathedral — a World Heritage Site — to the church of Escomb, of great artistic value and located on the outskirts of another Jacobean town, Bishop Auckland.

It is all signposted by the Friends of Finchale Camino Association and follows the course of a historic route that has been trodden by pilgrims since the Middle Ages, many of whom were on their Camino to Compostela.

This stage is rural: there are hardly any towns, and the existing ones are very small and picturesque. Along its route (in addition to Bishop Auckland) there are two places — a pub and a hotel — where you can recharge your batteries. 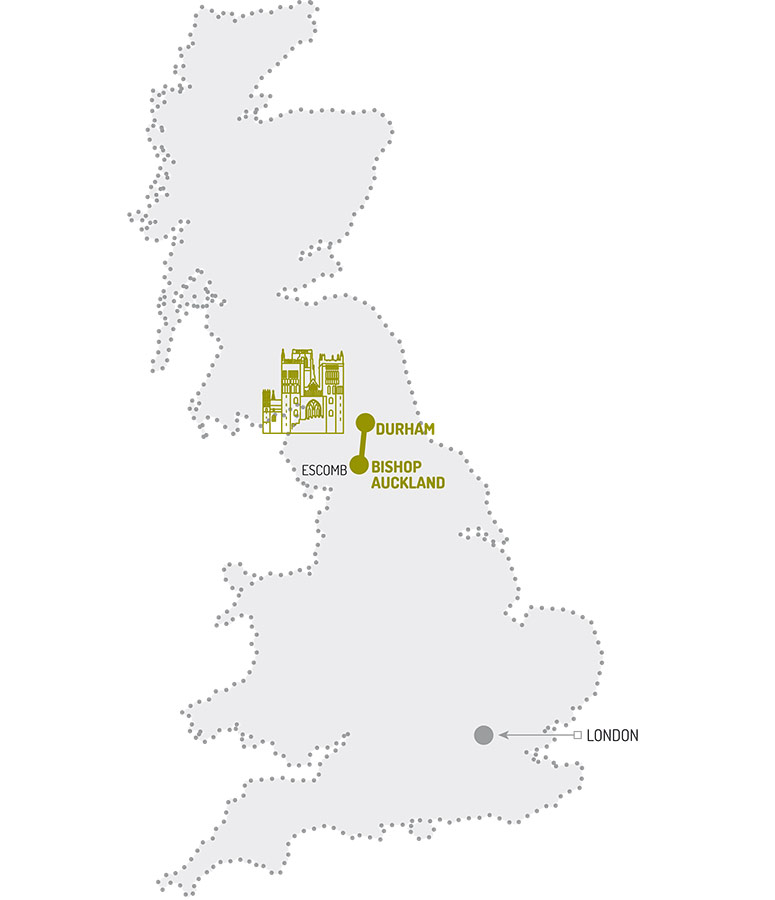 From all over England, pilgrims — including those from Scotland and northern Europe — would descend in search of a port. Today, the Association of Councils of the Camino Inglés and the Provincial Council of A Coruña are working with the Confraternity of Saint James and local groups in the United Kingdom to promote these sections, and some of them are already identified and signposted.

For example, the one from Reading to Southampton, known as the St James' Wayhas a guidebook produced by the Confraternity Reading and its Abbey were considered the centre of the cult of St James in England during the Middle Ages and many of the ships carrying pilgrims en route to Compostela left from Southampton. The Royal Abbey of Reading was one of the most important in England and in Europe as the repository of the hand of the Apostle St. James, one of the most important relics in Europe at the time, which attracted many pilgrims. At St James' Church in Reading it is possible to stamp the credential before continuing the 110 km route to Southampton via Winchester.

Another relevant section for British pilgrims to Santiago with the port of Plymouth as the embarkation point is the locally called St Michael's Way, in the south of Cornwall, between Lelant and St Michael Mount, and with the category of European Cultural Route. An impressive one-day route of the English Way maintained and promoted by the Friends of St Michael's Way, an enthusiastic group of volunteers who develop their own guides and organize numerous events with the route as the protagonist.

In addition to those already mentioned, there are other routes popular with British pilgrims because of their historical links with the Camino Inglés and where it is possible to obtain stamps for the credential.

In Cornwall there is a second recognised route, The Saints' Way, which crosses central Cornwall from side to side, from Padstow Harbour to Fowey Harbour, through the varied and beautiful Cornish countryside.

The Pilgrims' Way, between London or Winchester and Canterbury.

The Way of St Andrews, a total of eight fantastic pilgrimage routes with different starting points in Scotland and the north of England with the town of St Andrews as the destination, in whose cathedral the relics of St Andrew, patron saint of Scotland, were kept.

Walsingham Way from Norwich to Walsingham. 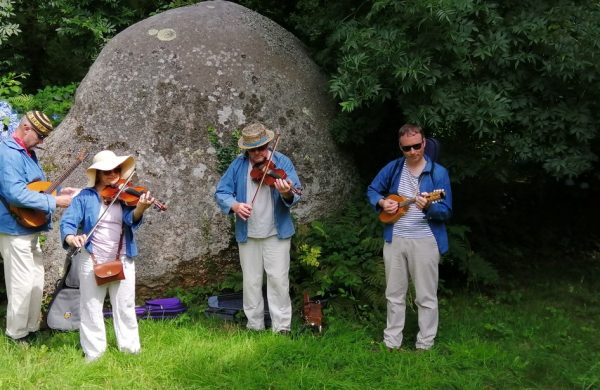 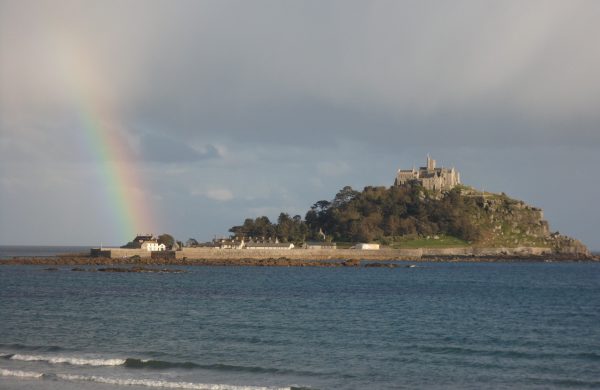 Camino Society Ireland has begun the task of defining and recognising authentic pilgrimage routes in Ireland so as to complete the 25 km in Ireland before travelling to Galicia and walking the remaining 75 km from the city of A Coruña and obtaining the Compostela. A Coruña has numerous historical links with Ireland, including being the main port of destination for Irish pilgrims in the Middle Ages. The 25 km travelled in Ireland and the 75 km from A Coruña have been named ‘The Celtic Camino’ or ‘The Celtic Camino’ by the Camino Society. Pilgrims must prove the completion of the Camino travelled in Ireland with the relevant stamps on the official credential and the Camino Society will verify the route by giving the pilgrim a Celtic Camino Compostela which will then shown in the Pilgrim's Office in Santiago de Compostela as proof of having travelled the 25 km in Ireland.

Among the most outstanding routes on Irish soil are the following:

Croagh Patrick Heritage Trail In County Mayo, in the west of Ireland, with a total distance of 63km, starting from Balla to the foot of Croagh Patrick in Murrisk.

Tóchar Phádraig In the same Irish county, this ancient trail is approximately 35km from Ballintubber Abbey to the mythical holy mountain of Croagh Patrick.

Bray Coastal Route This route of just over 30km runs along the coast from the town of Bray and ends at St James' Church in Dublin City.

Boyne Valley Camino In County Louth is this 25km circular route. It starts in Drogheda and passes through places such as Townley Hall, Melifont Abbey and Belnumber Wood.

St Kevin’s Camino This 30km route starts in Hollywood (Ireland) but can also start in Valleymount and follows in the footsteps of St Kevin, up Wicklow Gap and then down to Glendalough to visit the ruins of the old monastery.

St Finbarr’s Pilgrim Path This Trail follows in the footsteps of St Finbarr back in the 6th century and starts from Drimoleague in the Kealkill area to Gougane Barra after 42km.

Kerry Camino In County Kerry with a total distance of 57km from Tralee to Camp and then on to Annascaul and finally to Dingle.

St Declan's Way St Declan's Camino is the longest route we can enjoy on Irish soil as the distance is around 100km and covers many locations. It follows the path that Declan took in the 5th century to meet St Patrick. The route departs from Cashel in County Tipperary to Ardmore in County Waterford.

Slí ár Sinsear – The Way of our Ancestors The Camino of our Ancestors is a total distance of 29km, from Glenbeigh to Cahersiveen in County Kerry. It follows ancient trails such as the Kingdom of Drung which would have its origins in the time of the Milesians who came to Ireland from Galicia.